Join Date: Jul 2019
Location: NYC
Posts: 204
Alien "ghetto" betta attacks Turkey baster (LoL)
I *wish* I had a video and not sure where to post this, but "chat" seemed logical.

Tonight as I was lowering the turkey baster full of daphnia towards his temp quarters, Rigel AKA Sparky suddenly torpedoed out of the water and chomped on the end of the baster, landing back in the water with a big splash!

I was so surprised I jumped back LoL for such a little fish he packed a punch!

Has anyone else's Betta freaked them out like that?!

I jokingly call him "ghetto" bcs of the bling pink gravel.in his temp tank.

Just an aside - we've had some cold nights and I had to break through some ice to get to the daphnia, which were still alive and kicking. They seem to thrive in cold water. Soon as July hits they crash. 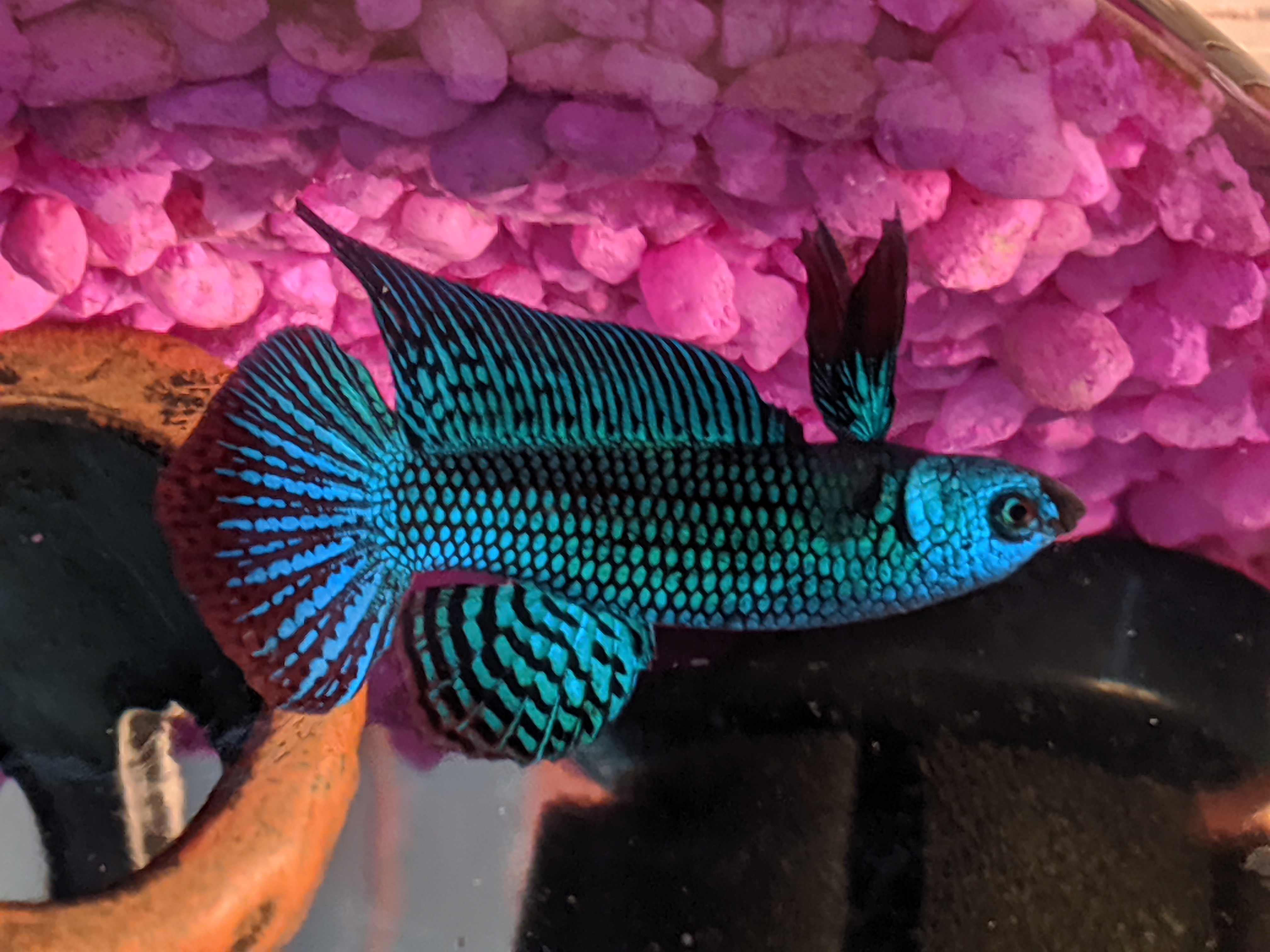 Join Date: Nov 2015
Posts: 2,664
Mine hasn't pulled that type of stunt but Lagniappe has been known to bite and latch onto my finger as I was lifting my finger up after dropping the food into his tank.

Then there was the time Bruiser decided to pick a fight with his filter the day after trying to explore the living room. I had rescued him from Wal-Mart and just put him into his main aquarium after treating him for the severe fin rot, I heard splashing coming from the tank and got up to get the craft mesh top I had for his tank, I glanced down as I got up and spotted him laying on the carpet. I still thank God I was home and right by the tank so he was only out of the water for a minute tops. The next day I looked in the tank and saw him flairing and charging his filter. The boy has more personality then he knows what to do with! Hes slowing down more now, and I haven't seen him trying to fight his filter in awhile, I think the tumor he developed on his side is starting to get the best of him.
Rainbo is offline
Quick Reply
Old 11-11-2019, 10:59 PM Thread Starter
Phish Head
Member

Join Date: Jul 2019
Location: NYC
Posts: 204
You have a fish named Lagniappe? That's way cool. And he bit your finger? Latched on? Just goes to show these guys know who feeds them! They have a surprisingly strong bite force don't they?

Sparky's personality is changing he was so shy and skittish
and now he's suddenly leaping out of the water for a baster it's just the last thing I expected from him.

At least he's not picking a fight with the filter. That's just weird.

But isn't that the word most commonly used by betta keepers to describe their fish? Weird?

Join Date: Jul 2019
Location: NYC
Posts: 204
@Rainbo forgot to ask what kind of filter do you have that makes such a worthy opponent?

Join Date: Nov 2015
Posts: 2,664
Quote:
Originally Posted by Phish Head View Post
@Rainbo forgot to ask what kind of filter do you have that makes such a worthy opponent?

Sent from my Pixel 3 XL using Tapatalk
Yep, Lagniappe is my unexpected, was not planning on getting him, betta. I just wish the store had thrown him in for free since he was in bad shape when I got him. He definitely has a really good bite! I use my finger to deliver food to my betta and I'm very grateful that he doesn't have a big mouth with large teeth.

In that tank I have an AquaTop Forze PFE-1, and I've no idea why he got so upset with it. It's just a HOB filter with adjustable outflow. Here he is fighting it.
YouTube (Short URL)
Phish Head likes this.
Rainbo is offline
Quick Reply
Old 11-12-2019, 08:33 AM
DaceyJ
Member

Join Date: Apr 2018
Posts: 107
My plakat, Dipper, will attack the turkey baster. He hasn't jumped out after it, but he has jumped up and gone after my hand while I was repositioning his heater. Apparently he liked it where it was. He constantly chomps me when I'm doing maintenance. My long fin bettas could care less and usually just cruise around watching to see what I'm doing to their tank. Thatcher loves swimming between my fingers and rolling around my arm when I'm messing with the plants. While Dipper is the most aggressive toward me, he is my most peaceful fish when it comes to tank mates. Go figure.
DaceyJ is offline
Quick Reply