Join Date: Oct 2013
Location: South East PA
Posts: 5,270
https://www.ghacks.net/2017/06/30/ph...hosted-images/
just found this. pretty much reads unless you want to pay $399.99 a year (or $39.99 a month) you're [censored] no uploaded images can be shown on '3rd party sites' such as: forums, ebay, etsy, etc.
time to do a mass image move to another image hosting site.. will take a few WEEKS to move everything over from my .. what 3-4 photo bucket accounts.... grrrrr
[Started updating my Journal again, view here]
Due to photobuckets bs cost for use of images on forums I have deleted all photobucket accounts. I apologize if you enjoyed or found my old photos helpful.
Aqua Aurora is offline
Quote Quick Reply
post #982 of 1004 (permalink) Old 06-30-2017, 10:35 PM
ThatFishThough
Member

Join Date: Jan 2016
Location: North Dakota
Posts: 3,462
Aquarium
Ouch. That'd be a good one for the rant thread. Sorry about that.
The Males~
Lucifer, Gabriel, Titan, King, Finnegan, Fin-again & Ricky.
Lucifer & Gabriel are my only non-rescues...

Join Date: Oct 2013
Location: South East PA
Posts: 5,270
Yeh so I deleted all my phohobucket accounts and didn't move everything to new image hosting sites.. way too much time plus this site doesn't allow post editing after what 20 minutes?

But I'm on imgur now and have recently rescaped my 2 desk tanks so will slap those here. No bettas yet but going to local stores this weekend hopefully to look around.

[7g cube]
[flora] various anubias including 2 golden, small hastifolia (i think-will have to move as it grows), 2 unknown, and 4-5 anubias lancolata (I think some may be minima, 1 has a marble/variegated leaf O.o)-all bought local unlabeled. Also some water sprite in back that will fill in and some small leafed lily plant (not dwarf lily or n. taiwan -i wish i could get my hands on those again!!!).
[fauna] nothing yet
[equipment] sponge nano sponge filter/small whisper air pump, hydro theo 25 watt heater.
[substrate] ancient gravel i have from 2014 or earlier
[hardscape] mopani driftwood 3 large, 2 small 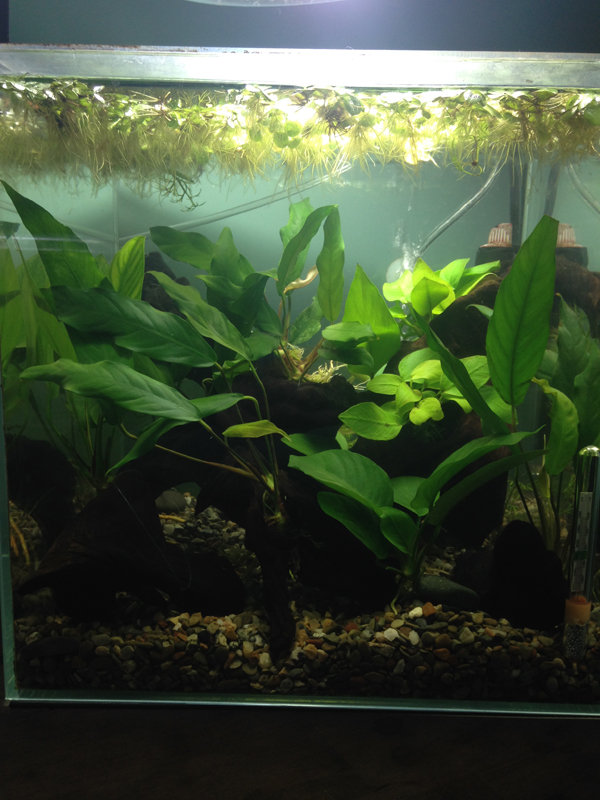 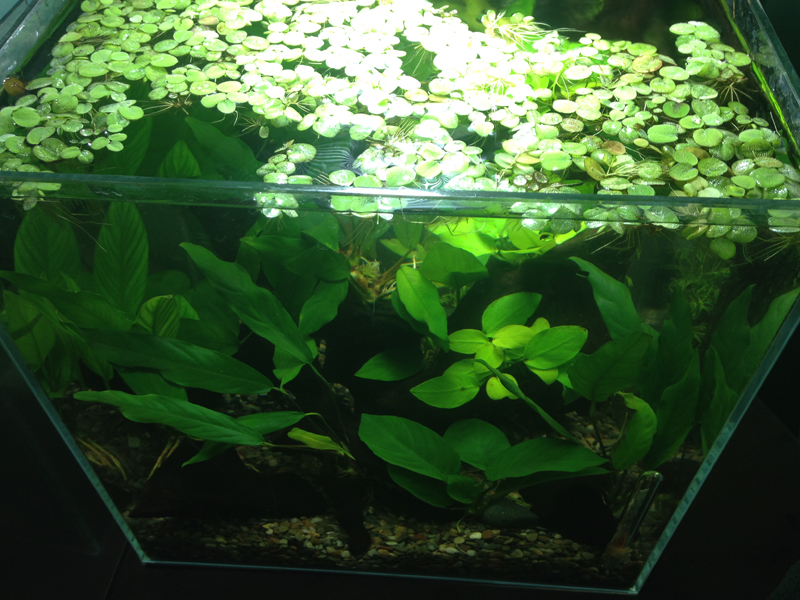 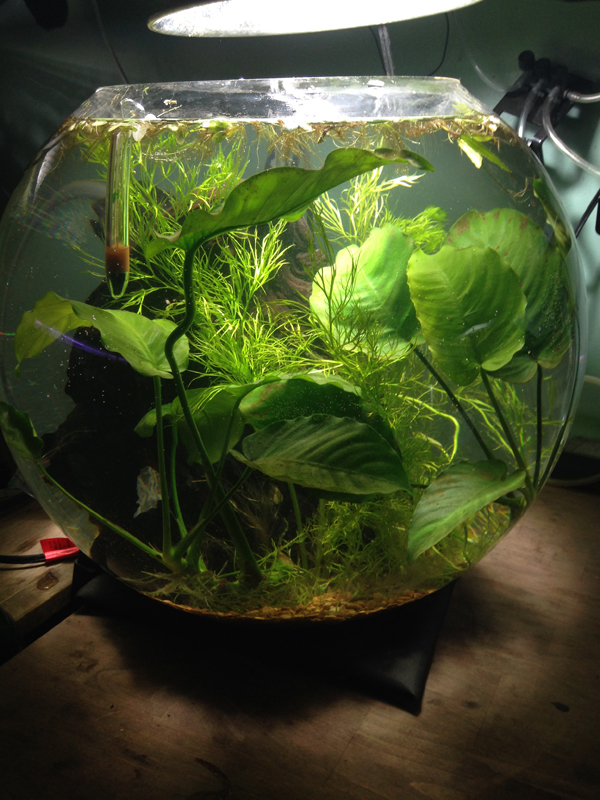 Still have the lexan lids for these tanks, just took them off for photo taking-reflects the light and gives too much glare.
themamaj likes this.
[Started updating my Journal again, view here]
Due to photobuckets bs cost for use of images on forums I have deleted all photobucket accounts. I apologize if you enjoyed or found my old photos helpful.
Last edited by Aqua Aurora; 01-11-2019 at 02:49 PM.
Aqua Aurora is offline
Quote Quick Reply
post #985 of 1004 (permalink) Old 01-12-2019, 04:48 AM
betterfisher
New Member

Join Date: Oct 2013
Location: South East PA
Posts: 5,270
Quote:
Originally Posted by betterfisher View Post
Great journal. Just wish those pics would still be there!
Sorry not paying $399 a year for photobucket, will dig up some of the good ones later this week and post them to imgur to put here
[Started updating my Journal again, view here]
Due to photobuckets bs cost for use of images on forums I have deleted all photobucket accounts. I apologize if you enjoyed or found my old photos helpful.
Aqua Aurora is offline
Quote Quick Reply
post #987 of 1004 (permalink) Old 01-13-2019, 09:23 PM
RussellTheShihTzu
TFK Moderator

Join Date: Mar 2013
Location: Tennessee
Posts: 18,059
I do not use an image host. Instead, I post directly from my computer. They never disappear...sometimes much to my chagrin.
My 60-Year Aquarium and 53-Year Betta Addictions
https://www.bettafish.com/144-journa...addiction.html
If your dog thinks you are the greatest do not seek a second opinion
RussellTheShihTzu is offline
Quote Quick Reply
post #988 of 1004 (permalink) Old 01-15-2019, 08:19 PM Thread Starter
Aqua Aurora
Member

Join Date: Oct 2013
Location: South East PA
Posts: 5,270
Quote:
Originally Posted by RussellTheShihTzu View Post
I do not use an image host. Instead, I post directly from my computer. They never disappear...sometimes much to my chagrin.
On other forums there's a cap on how much you can upload and I reached it fast, so never tried here.


[1/12-13/19]
So on Saturday my husband and i went to a Petco, not our closest one as its fish care is [censor]. Went with the intention of getting 1 betta for my 7g cube, and if my husband wanted one, another for the 8g jumbo bubble bowl (that he could move to his 10g half moon after its current resident passes-she's getting very old).


Had a had time biting my lip and not snapping at a family with 2 kids getting a death trap 'betta tank' and over hearing the son saying "yeah it killed my last one" about a previous fish..Mom looked like a total [censor] that would start a fight so I stayed quiet.. RIP little bettas bought by them...

I was inspecting every fish in the betta section for a long while. One of the early finds was a copper (with red and white metallic fins) half giant (king betta) with sbd (swim bladder disease/disorder), he didn't react much to me but when my husband held his cup he was more responsive. Guy was so massive he couldn't even move in that tiny container! Just lay on his side and wait to die.. There was another half giant, healthier but the more common 'wild' coloration blue/black/red that looked similar to a half giant my husband got a few years ago and lived in a heated/filtered/planted pond pot.
I found they had 6 elephant ear (dumbo) betta females. I've owned 2 EEs in the past, love their 'jazz hands' as my husband calls them pectoral fins. Wanted a female with all the driftwood a longer finned male might get more fin damage. The girls were so tiny and it was hard to choose but I finally went with the palest one (stress) who would zoom around her cup when I picked it up.
Had a woman working the fish section transfer my chosen betta girls to a bag with her original water to make taking home easier. We looked at dog toys then started towards checkout when I reminded my husband he could put a betta in my 8g if he wanted one. We ended up going back for the copper boy that was more interactive with my hubby. Had him (separately) bagged, got through checkout and tucked them both inside my husband's winter jacket to keep warm for the drive home.

Did a 70% water change on both of their tanks then started acclimating them. The size difference is so ridiculous the half giant could eat (though probably chock on) the tiny female EE. Anyways the half giant was happy for some warm clean water with the drip acclimation and stayed near the dripper, his finned unclamped while acclimating too. 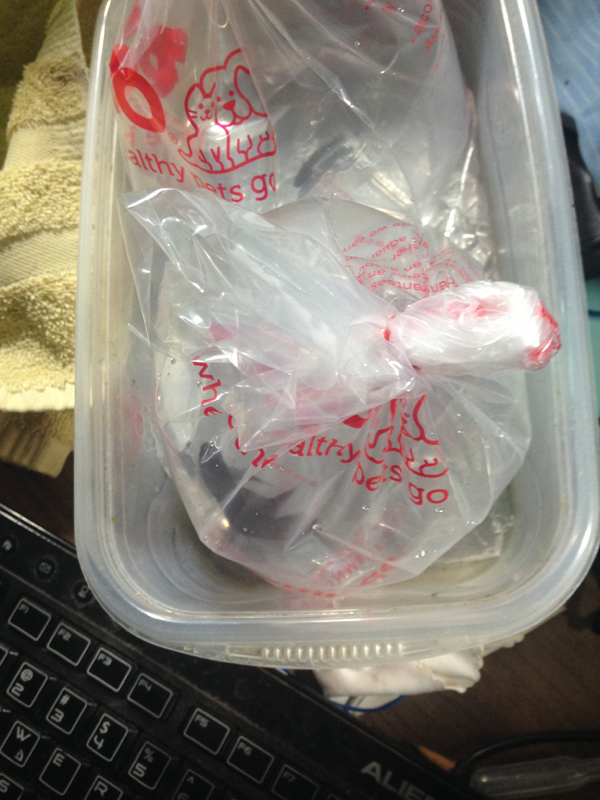 After a long drip and a bag float to make sure they were at temp they were released into their respective tanks. The little girl just diapered in the large wood and anubias. The half giant was very thrashy and nearly broke loose from my hands when transferred from bag to tank, nearly lost him. He spent all of Saturday and Sunday resting at the bottom of the tank-he'd move but I'd never see him swim, just in a new spot. The little EE girl explored er tank and colored up by late Sunday.


[1/13-14/19]
Was worried about the half giant over the weekend but on Monday i saw him swim around. he still has some sbd but he's moving around and doing well. Going to feed dafphnia tomorrow to purge any lingering blockage (you should not feed peas to bettas, they cannot process vegetation-they're carnivores).
Little EE girl got her first meal monday, blood worms and she loved them-learned really quick to come over where I wanted here in just 1 feeding, and not shy about my finger after food ^^ 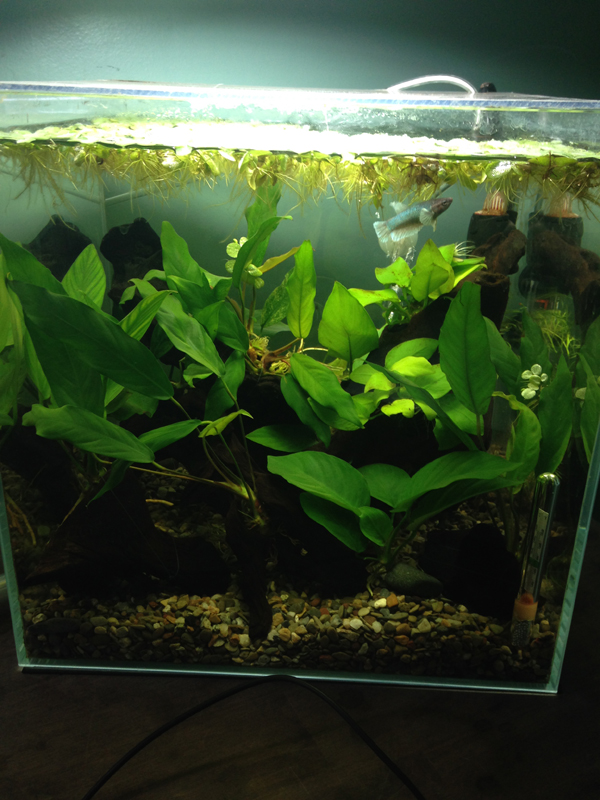 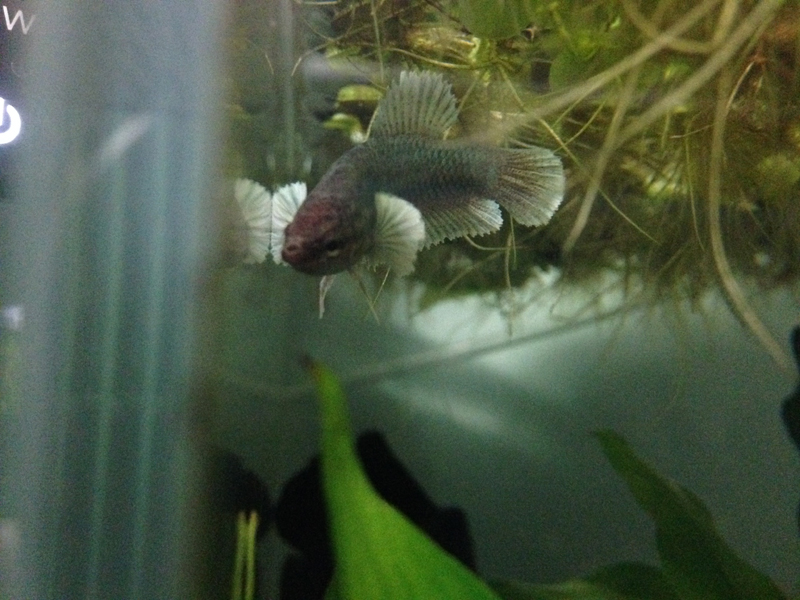 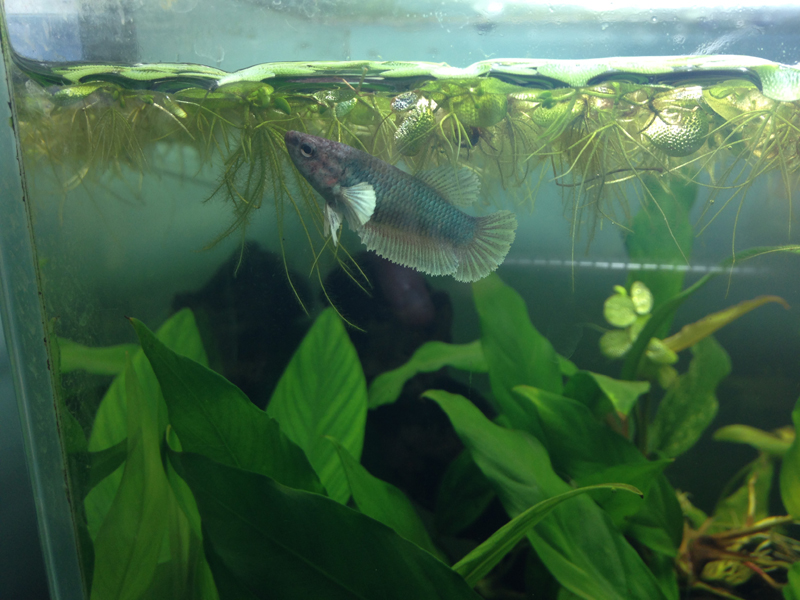 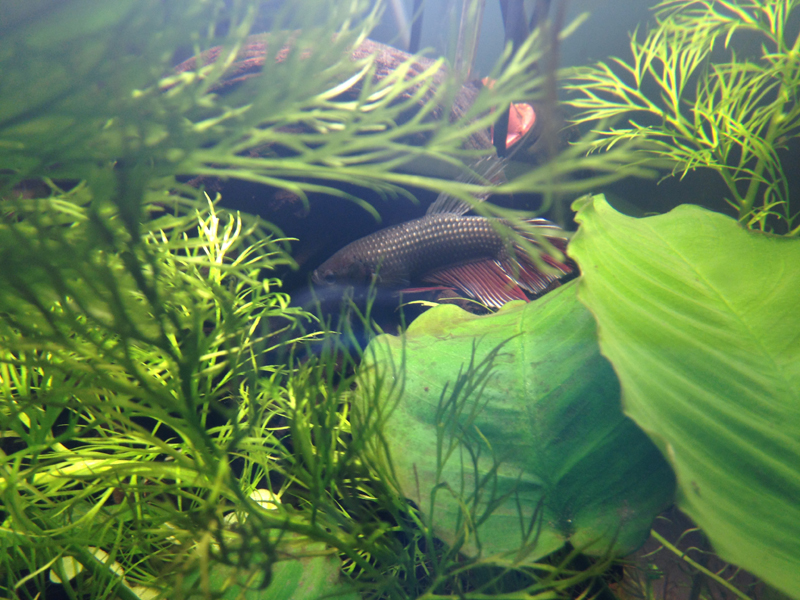 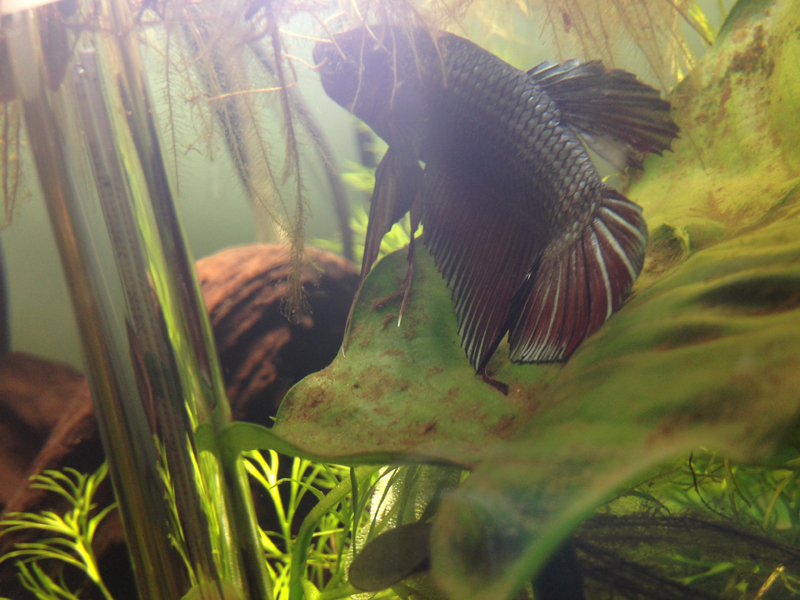 [1/15/19]
Titan is clearly hungry and nipping at salvinia (when he's not looking at himself in the thermometer reflection (I think he may be vain) so thawing daphnia in garlic extract atm, once room temp will try to feed with pippet. I don't want him nibbling the floating plants and getting clogged up-that's what killed Magnus.

Photos do not do these 2 justice.
themamaj likes this.
[Started updating my Journal again, view here]
Due to photobuckets bs cost for use of images on forums I have deleted all photobucket accounts. I apologize if you enjoyed or found my old photos helpful.
Aqua Aurora is offline
Quote Quick Reply
post #989 of 1004 (permalink) Old 01-15-2019, 09:04 PM
themamaj
Member