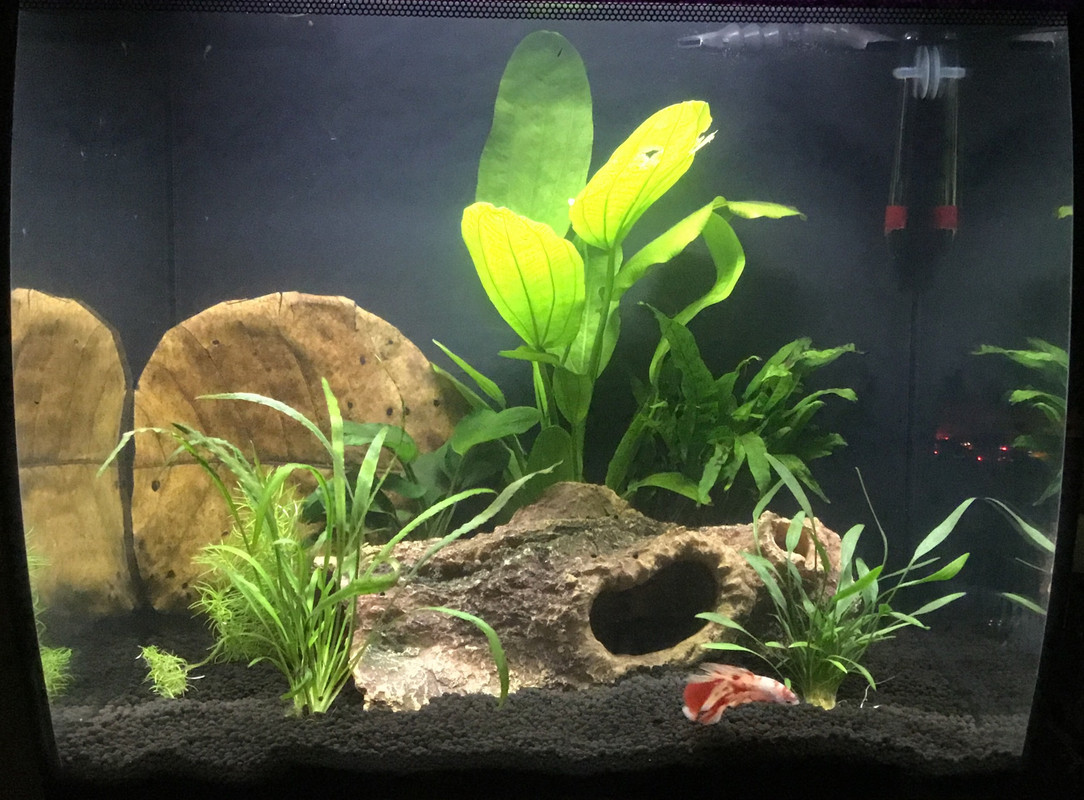 Join Date: Nov 2018
Location: Oil City PA. USA
Posts: 1,332
Aquarium
It's a nice touch to the tank, but our boys are a little shy of new toys. I have never purchased a hide for my tanks because I tend to do things the hard way. I make them from river stone and smooth pebbles, or colored shale that has been smoothed down by the river after being in them for hundreds of years, In my larger tanks I use driftwood I find and boil the them for hours so there is nothing going into the tank, I do the same with my finds of river rock and glass. I like walking the rivers and streams here at home. I always find something of interest that I can use right away or i can save for a future tank. In Ben's tank the jungle he has gives him enough places to hide and rest. I once had a betta tank with a hide that he got stuck in and I lost him, I'll never do it again. the openings in my put together hides have larger openings at both ends. No problems. and no fins are torn. You did it right by sanding down the rough edge's and I'm glad he enjoys it, and like I said it looks very nice in the tank.
bluesamphire likes this.
Old Dog 59 is offline
Quote Quick Reply
post #43 of 103 (permalink) Old 01-06-2019, 08:09 AM
Brutalcookies
New Member

Soooo.
Firstly, the diatoms have been a right pain.
The snail I put in gorged himself on them and then keeled over and died. Which disturbed me tremendously, and I am now very wary of expecting anything to eat a lot of diatoms!
Frequent water changes seemed to help with this.
But as soon as I eased off, I got masses of filamentous brown algae (sorry, no pics of that! lol). So I went back to the overly frequent water changes.

The riccia fluitans flourished, right up until the point that it got covered in filamentous brown algae, and I chucked it. Valentine loved that plant, so I have replaced it with some watersprite cuttings from the big tank, which seem very happy, are growing, and Valentine may even prefer. 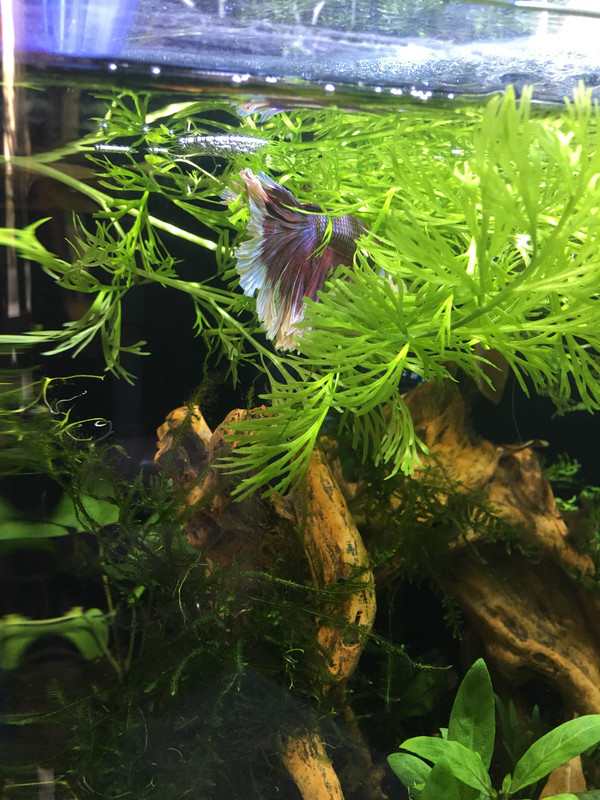 I have upgraded the filtration to an oversized HOB by allpondsolutions. Very pleased with it, and Valentine seems to prefer this water flow. It has much more filter media, which is great.

My anubias gracilis nearly died, but has recovered and has sent out several new leaves.
The miniature javas survived the diatoms, but are slow to grow.

The moss is flourishing, although I have to keep pruning the bits that have got covered with the filamentous brown algae.

Don't get me started on the carpeting plants. Have gone through 3 different ones, all supposedly 'easy', and all I can say is that they die easily! The only ones to have hung on are the dwarf sagittarius, which keeps on sending out runners and new sprouts, but as soon as the older plant gets to a certain size, it just seems to melt.

This is where we started: 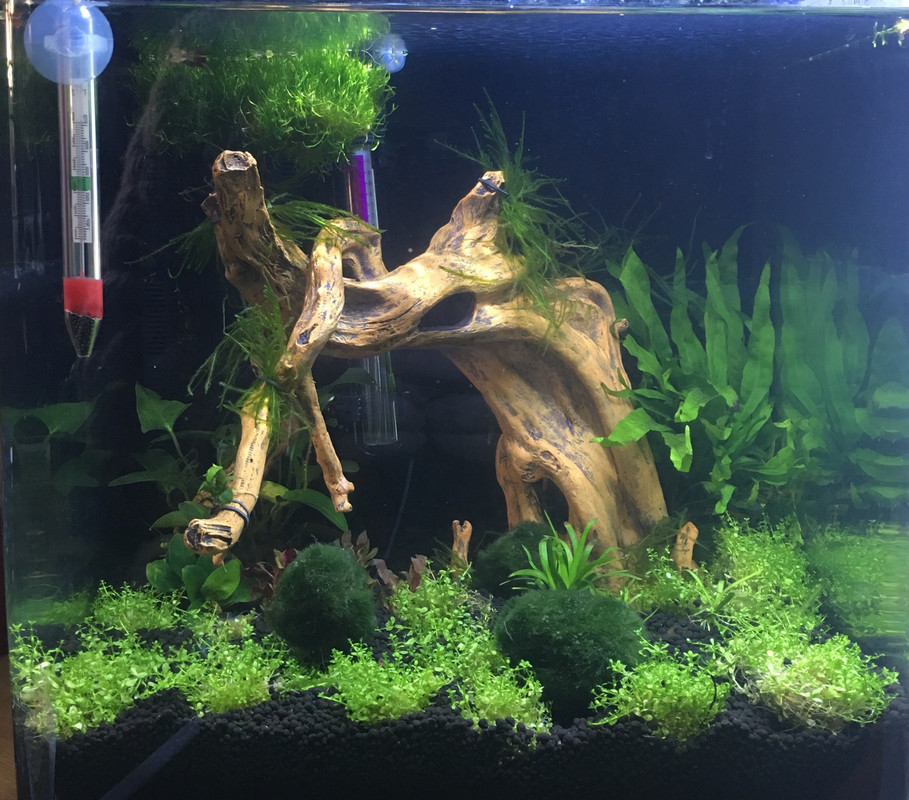 And this was yesterday: 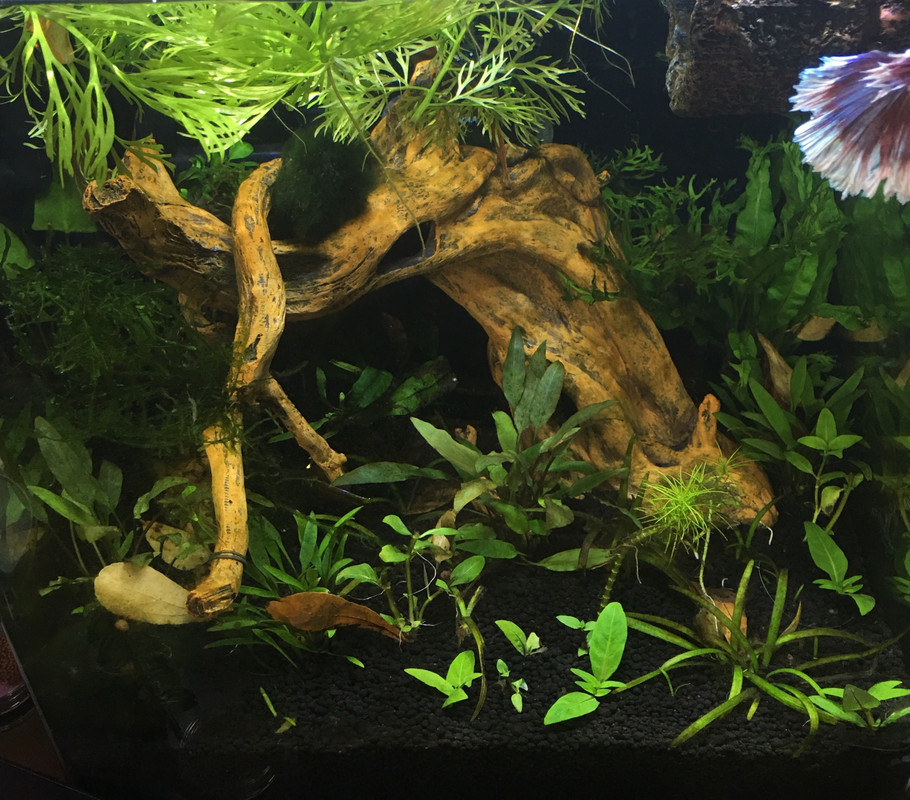 What a problematic tank! I have now reached the stage where I have some S. repens, some pogostemum erectus, the dwarf sag, and a couple of baby crypts just shoved into the substrate, waiting to see if any survive. If they do, then they will become my carpet plant of choice! haha! Fortunately the tank sits on my work desk, so I can monitor it, and fiddle and tweak regularly. I think that is the main reason I kept the brown filaments from taking over.

I moved two Amano shrimp into the tank a couple of weeks ago, bless 'em. Since then I have only seen one once (spot the invisible shrimp in the middle of the pic?: 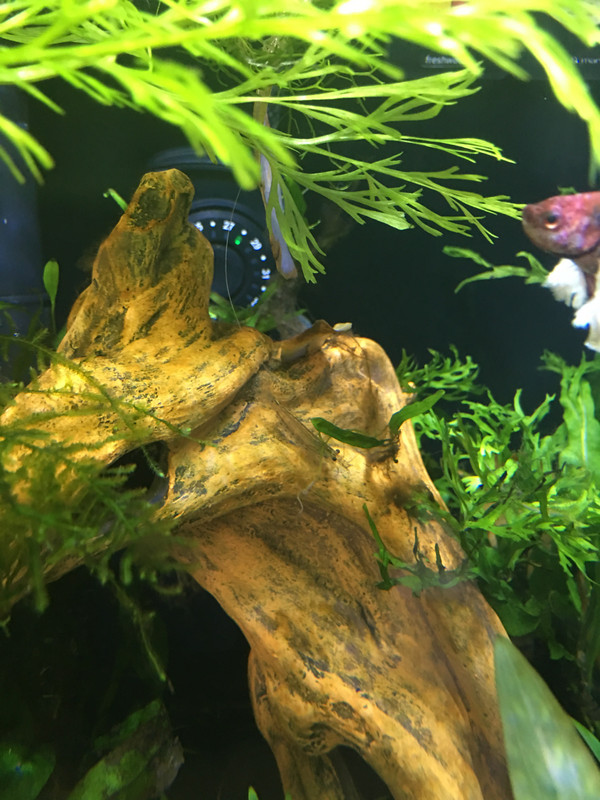 and I have seen one shed shell.
Nothing else.
They may as well have just disappeared into a black hole, which is challenging in a 12 inch cube!
However, they must be working hard, because things are definitely looking less fuzzy.

I am keeping up with the frequent 25% water changes - nearly every other day - in the hope that this will reduce the nutrients for the algae.

But the biggest issue is, I think the light. It may have been what is causing every problem. It came with the tank, and I don't think it is up to anything more than being a basic desk light. I have a Finnex Stingray on order, and have my fingers crossed that things will actually start growing once it is installed. 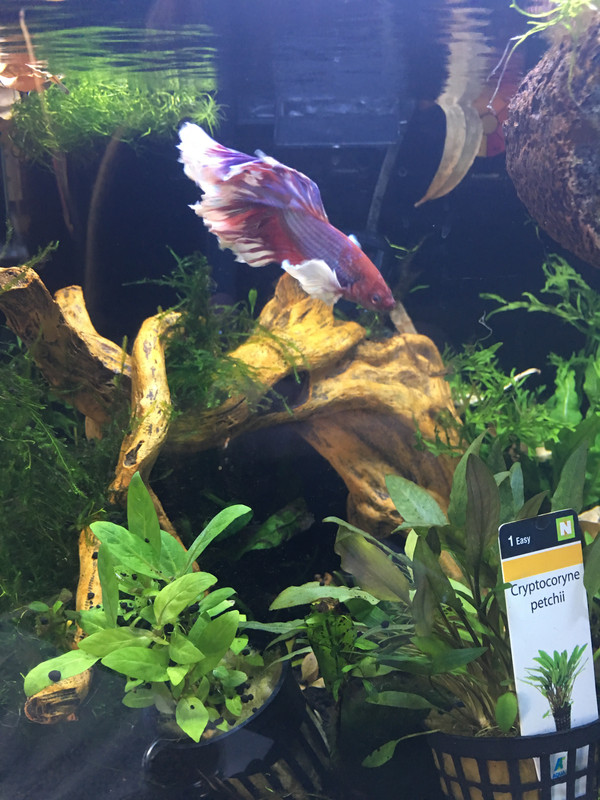 This is what I have to put up with!
Terrible, isn't it?

Plants just dropped in and left there for DAYS while they decide to melt or live.
It just isn't acceptable, is it? 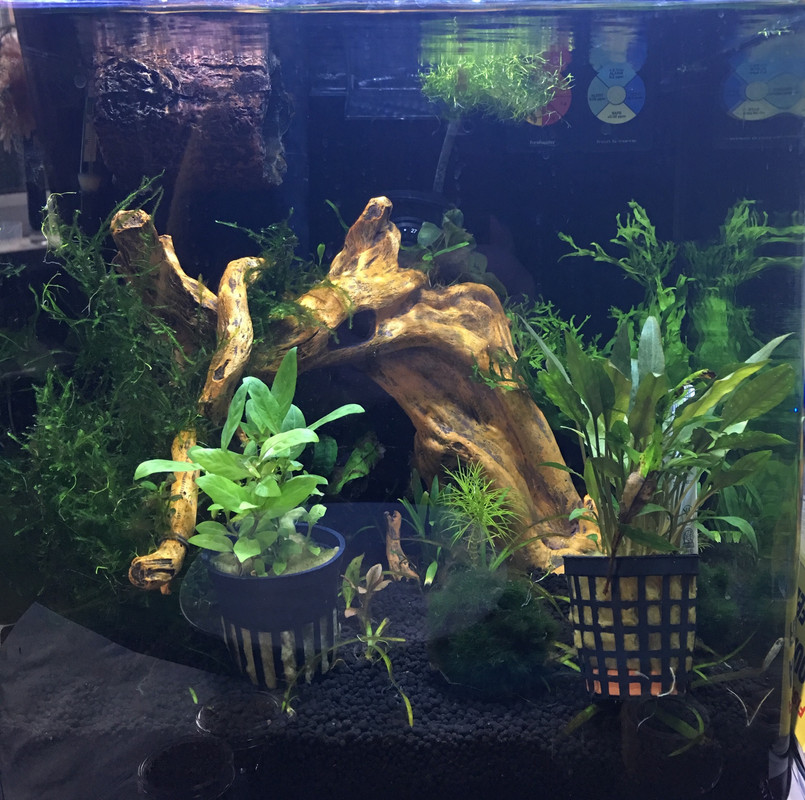 At least She sorted it out eventually. And set up the new filter. AND remembers to feed me occasionally. Not often enough though.
3 meals a day is NOWHERE near enough when you are as magnificently handsome as I am.
See? 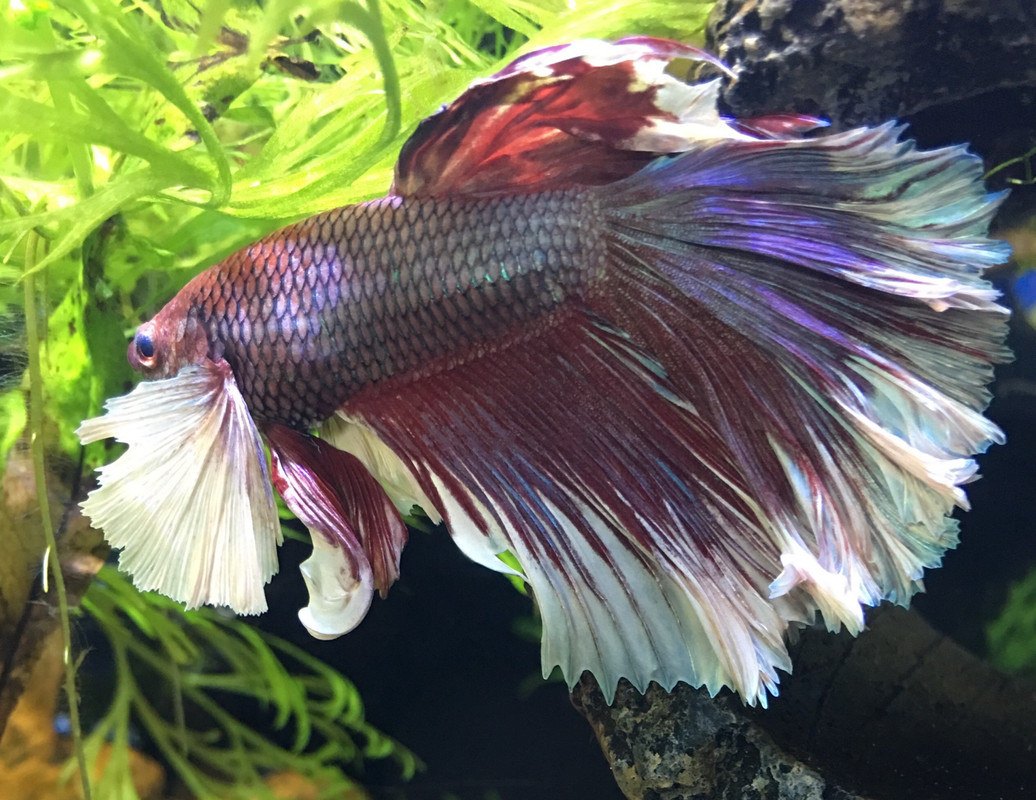 And don't start on about fin biting.
She made a real song and dance about it a few days ago.
As if I would!
Took her AGES to work out that it would be impossible for me to bite my dumbo ear, cos I can't reach. Silly human.
So then she decided it was that fin split I had ages back, just growing back in.
Duh!
I could have told her that. 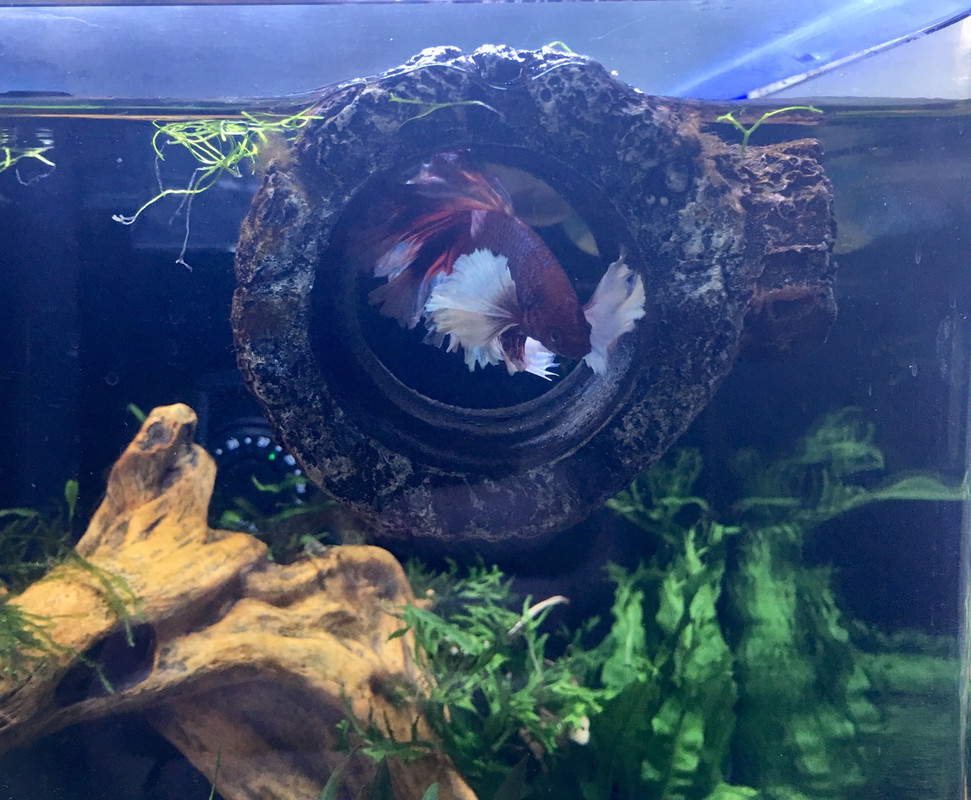 I have to spend a lot of time in it, so that the shrimp can't trespass. I will eat them when I find them. But they are completely invisible! And they hide. All the time.

Join Date: Nov 2018
Location: UK
Posts: 564
@RussellTheShihTzu or any other moderator who sees this
Would you be incredibly kind?
Would you move this thread into Journals, and re-name it 'Valentine's tank'

Join Date: Nov 2018
Location: Oil City PA. USA
Posts: 1,332
Aquarium
This is a great journal, I really enjoy reading it. He really has a flair as a story teller. LOL. Great looking tank. The plants look very healthy. And tell Val, That tummy look is in for the females. They love a guy with a little belly.