Join Date: Oct 2016
Location: Indonesia
Posts: 21
Over 180?
Is a tail span of over 180 degrees considered a fault? I stumbled upon a photo of a betta who's tail I'm pretty sure, spans wider than 180 degrees.

And is the caudal peduncle wrong if it kind of curves upwards?

Join Date: Jun 2010
Location: Jakarta, Indonesia
Posts: 5,738
I believe it is. Caudal should only spread to 180* and the peduncle should be straight or caudal at 90* to body. 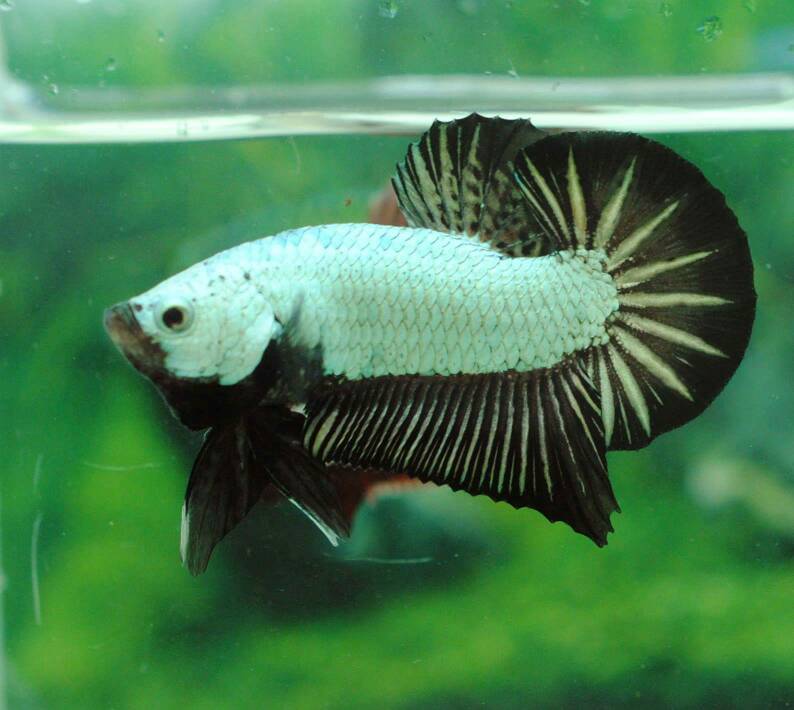 this guy was the winner in dragon class hmpk. In this year Singapore IBC so i dont think its a rule to have 180 cadual.

Join Date: May 2011
Location: Kuala Lumpur, Malaysia
Posts: 42
Hi Amanda. As per IBC standards, caudals which spread over 180° (over-halfmoon a.k.a OHM), is not a fault.

Halfmoon caudals are faulted if the spread falls short of 180°. At 180° or more, no fault applies. There are some judging communities which show preference towards OHMs (>180 caudals), but these are just personal preference and are not guided by any prominent standards. IBC states that "Caudal fins that exceed 180° spread are not favored over fish displaying 180° spread". So, it is clear that neither caudals with spreads above 180° nor at exactly 180° are preferred over one another.

Some things to watchout tho:
- It is important for caudals to have a top-bottom symmetry. Non-symmetry is faulted, regardless of the caudal spread. Particulary when judging OHMs in shows, this should be given particular attention.
- A common problem with some OHMs is excessive ray branching and bent rays, which are faulted.

For your caudal peduncle question, are you referring to the caudal or the peduncle? Maybe you can attach a picture which shows exactly which part of the fish you are referring to.
Warm greetings from Malaysia,
Khai
BettaMas is offline
Quote Quick Reply
post #5 of 6 (permalink) Old 11-30-2016, 05:29 AM Thread Starter
Amanda1798
New Member

Join Date: Oct 2016
Location: Indonesia
Posts: 21
Quote:
For your caudal peduncle question, are you referring to the caudal or the peduncle? Maybe you can attach a picture which shows exactly which part of the fish you are referring to.
Ahh, I see
That bit that kind of curves up a bit at the end. Which so far I've seen only in OHMs.
Thanks!
Amanda1798 is offline
Quote Quick Reply
post #6 of 6 (permalink) Old 12-01-2016, 05:31 AM
BettaMas
New Member

Join Date: May 2011
Location: Kuala Lumpur, Malaysia
Posts: 42
Alright. I see that you are referring to the peduncle. It is quite common to see certain fish having their peduncles bent upward like that when they are doing a full side-flare (regardless of the caudal spread), but the peduncles revert to being straight at other times. I personally do not fault this when judging at shows, and do not find this mentioned as a fault in the IBC standards (do point it out to me if I am wrong).

There is however a type of body fault which applies to the peduncle. It is common to find certain DTs or DT-geno STs having (permanently) bent peduncles. This type of bend is most noticeable when viewing the fish from above, and are faulted according to its degree of defect.