The plants have been busy, haven’t they? 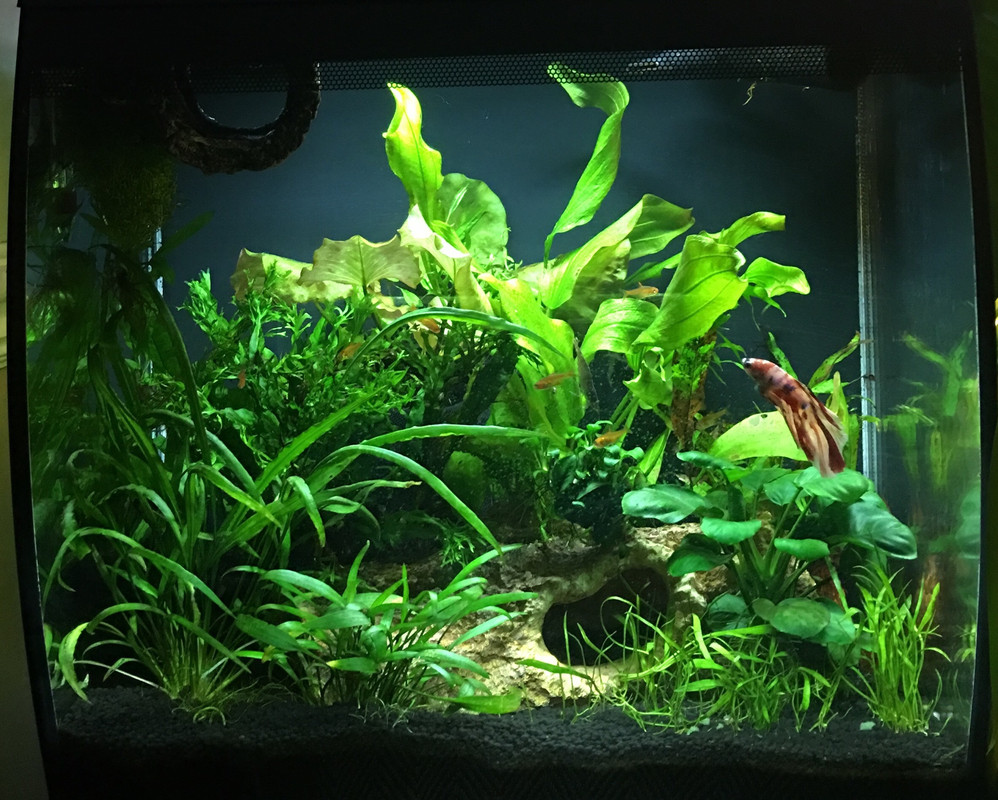 I yanked the lily out and bagged its roots up in a net with some substrate (in an attempt to slow down growth). Seems to have worked. There are still half a dozen leaves, but it has slowed the huge growth rate.

The java fern has died back
The pogostemon erectus failed (Light not strong enough)
The crypts are flourishing
The anubias are taking over!
I added a windelov which is happy
The echinodorus is both dying back and producing new growth simultaneously, so i assume it is adapting to the tank.

Kham seems very happy grooving away in and around his plants.
I still don’t think he has noticed any of the other inhabitants.
Big Red has been moved into my 200litre tank, where he seems very happy with the rest of his friends. He is not showing any aggressive behaviour there, so he has got over it.
The ember tetras seem very happy, but i do wish they had more space to shoal properly.

I added a nerite (orange with black dots) as a janitor, but he is only interested in cleaning glass.
So then (with trepidation) I added 2 amano shrimp.
Turns out Kham has ignored them as he ignores everything.

The plan was to let them clean up, then move them in to Tagawa’s tank so they could live with their amano mates in there.
Rookie mistake.
It will be impossible to move them now.
Not only are they near invisible, they are also faster than lightening, and can vanish into the undergrowth before i can lift the tank lid.
They are there for life.

Since amano are happiest in groups, I now have to decide whether to add more...

They are doing a great job cleaning, and use the betta log more than Kham does.

I have tried riccia fluitans, and while Kham and I love it, it gets broken up a bit by the strong flow.
So now have some of Russell’s recommended Ceratophyllum submersum on order to see if that fares better.
My only concern is that it may filter the light too much, but the tank does need more surface plants.
► Show Full Signature
70litre tank: mature setup; betta, purple rasboras, male guppies, amano and wood shrimp. Heavily planted.
22litre cube tank: (Tagawa); betta, yellow dwarf shrimp. Pond snails and 1 assassin. Heavily planted.
Midnight in the 57litre tank (Midnight) ember tetras, 1 amano, 1 ghost, 1 nerite, pond snails, 1 assassin, doing his thing. Heavily planted.
200litre tank; honey gourami, cherry barbs, green neons, otocinclus, nerites, pond snails, amano. Heavily planted.

Joined Nov 11, 2018
·
1,337 Posts
The tank looks wonderful. the plants have really grown. Can't for the life of me find any reason for the Java Ferns to have died back. That tank looks healthy and happy.
21 - 23 of 23 Posts
Join the discussion
Continue with Facebook
Continue with Google
or sign up with email
About this Discussion
22 Replies
7 Participants
Last post:
Old Dog 59 Apr 22, 2019
Betta Fish Forum
A forum community dedicated to Betta fish owners and enthusiasts. Come join the discussion about breeds, health, behavior, tanks, care, classifieds, and more!
Full Forum Listing
Explore Our Forums
Betta Fish Care Betta Fish Diseases and Emergencies The Lounge Betta Pictures Betta Fish Bowls, Habitats, and Accessories
Popular Communities